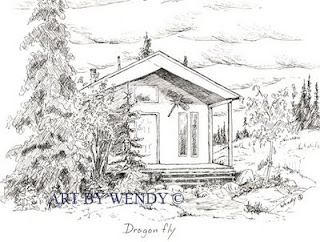 DRAGONFLY - 6.5 X 9 - SOLD
In my last post, I mentioned that we stayed with friends in a cabin on Great Slave Lake.  Dragonfly was built by them over the last few years.  It is a lovely cabin on a small island in a group called Pilot Islands.  Howard, one of the owners tells me that much of the material was taken out in the winter with a skidoo and trailer.  It would be stacked and used in the summer.  Other things were brought out in the summer with their power boat and it was fun manhandling things like a stove or fridge out of the boat, on to their dock and then up over the rocks to the cabin. 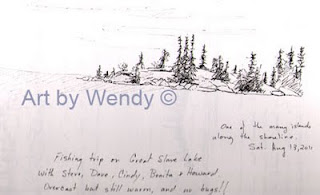 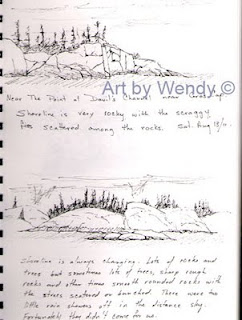 Shoreline Sketches - some were made as we were trolling
A project like that is hard work, but comes with a real feeling of accomplishment and of course lots of stories.  After hearing all of their stories it really gave me a desire to venture up north in the winter and see what life is like.  I really want to see an ice road, ride on a skidoo, see the northern lights in the winter and see the ice and snow in the setting sun.  My brother tells me March is a good time to visit so don’t be surprised if I head off next winter!!
In the meantime I thought you would enjoy seeing some of my sketches from the trip, they are just little snatches of north, so different but still so picturesque. 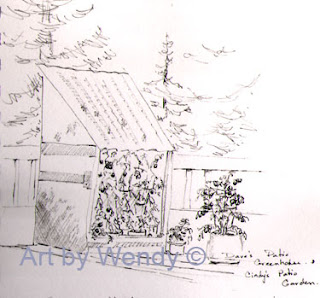 Dave & Cindy's Greenhouse, we got lots of fresh cherry tomatoes from their patio garden 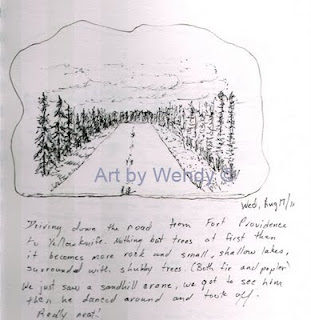 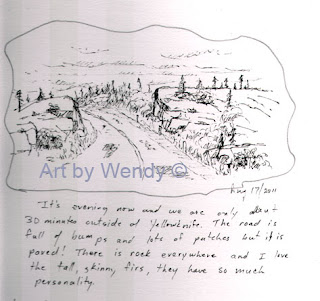 Quick sketches as we drove back from Fort Providence, I love the rocks and trees.  The scrawny thin trees are so fun to draw.  So much personality!!
Posted by Wendy Mould AFCA at Thursday, August 25, 2011 3 comments:

Yellowknife, NWT was a Great Place to Visit 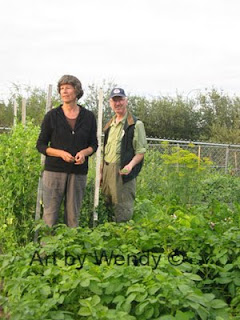 Dave and Cindy with their great garden
First up was a potluck dinner at the community garden, it was great to see such lush green vegetable gardens so far north and no bugs!!  My brother and sister-in-law, Dave and Cindy had a wonderful plot full of my favourite things, fresh peas, green beans and new potatoes which we enjoyed throughout our trip.
On the weekend we were off to Dragonfly, a cabin on an island on Great Slave Lake.  Howard and Bonita the cabin owners, were gracious in showing us life on the GSL.  With their boat we motored along the shoreline and stopped for little adventures, 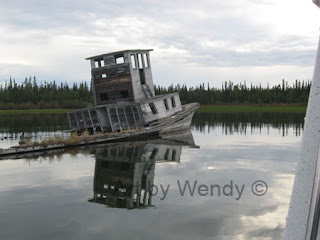 An old boat in Mosquito Bay
we fished and caught some great pike for dinner, we feasted on wild raspberries and high bush cranberries that we picked on our adventures and generally had a wonderful time.  Everything was new and exciting and different. (Remember we are used to the west coast of BC with tall mountains and trees everywhere.) 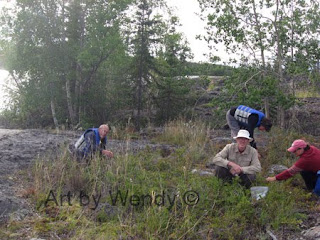 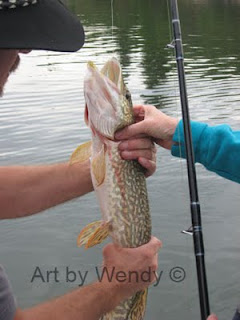 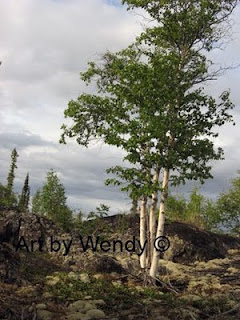 Trees, rock and mosses everywhere!!
One of our day trips was down the road to Fort Providence where the Mackenzie River feeds out  of the Great Slave Lake.  Our trip took us through the Mackenzie Bison Sanctuary and we were treated to many bison sightings.  Also a special treat for me was the sighting of Sandhill Cranes.  I didn’t realize that many spent the summer there.  (As you know they have been the subject of many of my pictures. ) One treated us to his squawks and dance and then took off. I have never seen them fly; it was quite a sight to see. 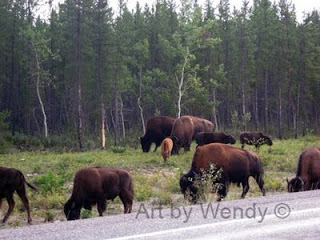 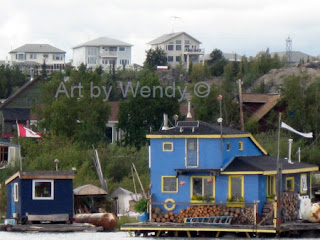 One of the boat houses on the Lake in Old Town
Our trip is over but we have great memories.  I want to return to the north but my next trip will be to see the winter!! 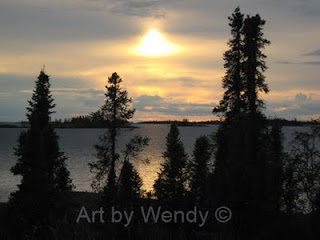 Posted by Wendy Mould AFCA at Monday, August 22, 2011 4 comments: Links to this post

WAITING OUT THE STORM 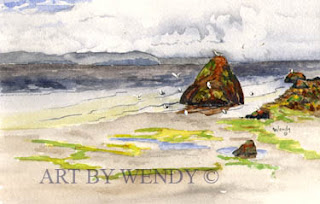 More pictures from our trip to Texada Island off the west coast of British Columbia.
This picture was actually the first I did when we first arrived at Texada Island for our holidays.  We had just had a day of rain, I don’t mean a bit of rain, I mean it rained all day and when it wasn’t raining it was pouring.  The next day was still wet but the sun tried to come out a bit in the afternoon.  We were camped in a trailer but even so I just felt that everything was damp and we weren’t done yet.  The clouds were moving but still thick and by the way the seagulls were staying close to shore I felt they agreed with me. 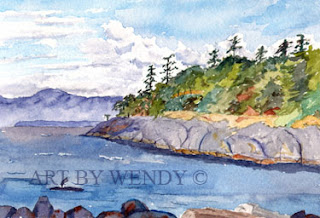 WINDY MOMENTS - 5 X 7 - Available
As you can see things did pick up over the next few days.  We had sun, wind and gradually the weather warmed up.  My greatest joy in painting this trip was the clouds.  When you are on the water you can see all kinds of formations as they build over the water and the mountains across the strait.  I really enjoyed painting them as you can see. They were just amazing. 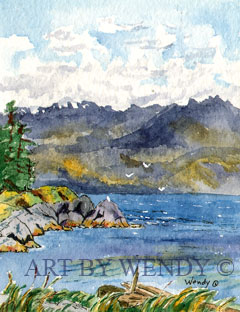 OFF THE POINT - 3 X 4 - Available
We are off on another trip, this time to northern Canada, Yellowknife in the North West Territories.  My brother and his wife live there and we are looking forward to a nice visit, fishing, a bit of hiking and he has arranged a two day sailing trip on Great Slave Lake.  I probably won’t get much painting done but I am going to try and do some sketching and of course I will have a few pictures to share with you when we get back.
Posted by Wendy Mould AFCA at Monday, August 08, 2011 2 comments: Links to this post

Wendy Mould AFCA
Surrey, British Columbia, Canada
Canadian Drawing Master, Drawing Society of Canada. Wildlife Artist. I love to draw in pencil, ink and watercolour. My passion is “bringing nature to life”. Pet portraits are my specialty. For Sales or Commissions contact me, I would enjoy working with you. Thanks for stopping by.